Why Is Blockchain Security Critical & How Is It Implemented 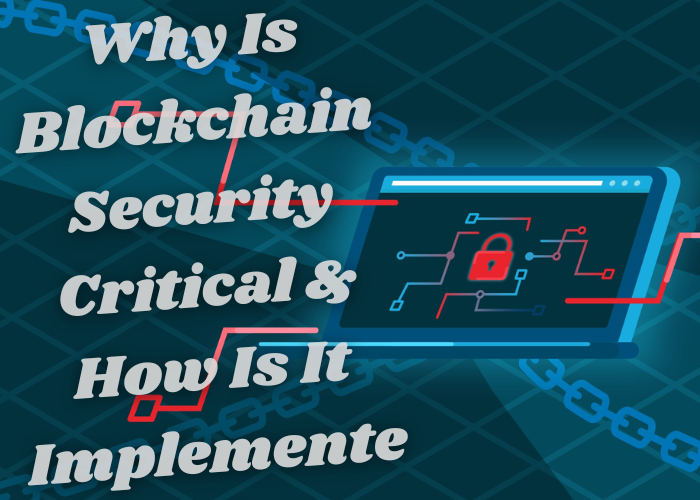 Blockchain security is critical because it’s the foundation of the trust in the system. If blockchain security is compromised, the integrity of the entire system would be in jeopardy. Blockchain security is implemented by encryption techniques, authentication techniques  , and cryptographic techniques. For example, the blockchain network could be compromised if someone takes unauthorized control of the system before the transaction is complete. Both encryption and authentication help to prevent this kind of malicious system takeover. Encryption is where data is securely scrambled, and only permitted users are able to unscramble the data. Authentication is where a unique identity is assigned to a specific individual. The identity is listed on a “permissions list” that the system verifies. This prevents the possibility of a fraudulent change in the permission list, because only a genuine identity would be on the list.

Blockchain security is a big concern for many people in the business world. It’s not just about the security of the data being stored, but also the security of the blockchain itself. One of the biggest concerns is the possibility of a 51% attack. This is when a majority of the miners in the  network (a pool of miners) act in a coordinated fashion to maintain control over a blockchain, and thus, its transactions. This is where the proof-of-work concept comes into play.

Cryptography And Its Role In Blockchains Security

Cryptography is a science of transforming information, called a ciphertext message, into a secret code, called a cryptogram. The message is hidden by changing the letters of the original message into a new set of letters or symbols. The ciphertext message is then decoded back into the original message by someone who knows the  secret code used to convert the letters into symbols. Cryptography may make secret information confidential, but it does not guarantee secrecy. Cryptography is the science of concealing information. Steganography is a subset of cryptography that conceals encrypted data within another medium or an object.

How Do Private And Public Keys Work To Secure Data

How Hashing Helps To Secure Data

How to Use Blockchain to Make Money

5 Blockchain Security Issues and How to Prevent Them